The mid-September period was really a quiet one. We had very few sightings of interest and banding was slow as well. In fact, it felt like October with leafs falling and the forest all quiet.

In spite of the quiet, there were a few highlights. One of them was a high-flying southbound Northern Hawk Owl on Sep 13 and on the same day we finally saw our first Jaeger of the season. Unfortunately the views were distant and brief so we couldn't determine the species. Likely the same bird gave nice views on Sep 16 and was identified as a Parasitic Jaeger. The season 1st Glaucous Gull, a juvenile, landed briefly on the sandbar on Sep 15 and the season 1st Snow Geese, a flock of 74, gave excellent views to an unusually numerous crowd of observers on Sep 18. The first two Swans flew high overhead the same day but could not be identified to a species. There wasn't much action with birds flying by. A few to a few tens of raptors were seen most days and Lapland Longspurs would zip by in ones and twos per morning. The only higher counts were made of White-winged Crossbill (151 on Sep 16) and American Robin (430 on Sep 17).

We banded only 209 birds during this period. An American Pipit on Sep 12 was a season 1st as was a Common Redpoll on Sep 20. Two young male Golden-crowned Kinglets were a nice treat on Sep 18. The period top five was Dark-eyed Junco 66, Yellow-rumped Warbler 30, Ruby-crowned Kinglet 21, Orange-crowned Warbler 17 and Boreal Chickadee 16. The current season top five is Alder Flycatcher 498, Yellow Warbler 449, Orange-crowned Warbler 359, Yellow-rumped Warbler 279 and Dark-eyed Junco 199.

The banding totals as of September 20th (the number in brackets indicates the number banded since the last blog entry):


The first ten days of September offered a lot of exciting birding and banding. Pretty much every day there were sightings of interest and good southward movement of various species. The main movement of Greater White-fronted Geese happened on Sep 1 when we tallied over 1600 of them, actually a low number for a peak for them.  Also a Swainson's Hawk was seen that day. The first signs of raptor migration occured during the next two days with a few tens of both Sharp-shinned and Harlan's Hawks seen. More impressive was the flight of Yellow-rumped Warblers on Sep 3 with 225 of them identified and a further over a thousand unidentified passerines counted flying past TLBO. Lapland Longspur and Three-toed Woodpecker that day were both new for the season. On Sep 4 the season firsts Sanderling and Long-billed Dowitcher were noticed while a group of three Golden-crowned Kinglets at the tip was unusual. The same day we counted 75 Rusty Blackbirds. On Sep 5 we had two season firsts - Hairy Woodpecker and Black-billed Magpie.

In the other end of the migration spectrum, a Bank Swallow on Sep 6 was quite late and likely the last sighting of the season. Also that day over 1800 passerines were counted flying by including 280 Varied Thrush, 180 Yellow-rumped Warblers and 110 White-winged Crossbills plus plenty of unidentifieds. The season first Golden Eagle was seen on Sep 7. Sep 8 was the day of quality as first a group of four Harlequin Ducks was spotted followed by juvenile Sharp-tailed Sandpiper - a new species for the observatory! Finally, the period had a great ending with a really nice flight of over 400 Sandhill Cranes and over 650 raptors on Sep 10! The raptors were a good selection of most common Yukon species and included the following - Harlan's Hawk 368, Sharp-shinned Hawk 141, Northern Harrier 54, American Kestrel 38, Bald Eagle 14, Osprey 13, Peregrine Falcon 10, Merlin 9, Golden Eagle 8 and the season first Rough-legged Hawk one.

The banding totals as of September 10th (the number in brackets indicates the number banded since the last blog entry):

There were a few interesting sightings made during the last third of August. As common a bird as Killdeer is actually quite rare at TLBO but one juvenile stopped on the shore on Aug 27 and two more on Aug 30. The rest of the interesting sighting were all new migrants for the season - a Peregrine Falcon on Aug 27, Greater Scaup on Aug 28, Harlequin Duck and Mountain Bluebird on Aug 29, and Swainson's Hawk on Aug 31. Harlequin Duck is a very uncommon migrant through the site and the Mountain Bluebirds were very early. Usually we don't see them before the last week of September.

Banding was much busier than in the mid-August period with a total of 690 birds banded including 182 on Aug 21, 132 on Aug 30, and 118 on Aug 31. The two most exciting birds caught were a Merlin on Aug 21 and a Wilson's Snipe on Aug 30. Both were only the fourth individual of their species banded at TLBO. A Townsend's Solitaire on Aug 27 was the second for the season making this year the only year we've ever caught more than one. American Tree Sparrow and Rusty Blackbird, both on Aug 24, were new banding species for the season too. The period top five is as follows:  Yellow Warbler 136, Alder Flycatcher 134, Orange-crowned Warbler 129, Wilson's Warbler 68, Yellow-rumped Warbler 61, and the season top five looks like this: Alder Flycatcher 416, Yellow Warbler 234, Yellow-rumped Warbler 201, Orange-crowned Warbler 163, and Blackpoll Warbler 108.

The banding totals as of August 31st (the number in brackets indicates the number banded since the last blog entry):


The mid-August period was overall a quiet one. Some of our most expected signs of fall, the season first records, were made of Greater White-fronted Goose on the 17th and of Thayer's Gull on the 19th. The highlight was the observatory's first, a long overdue, Great Blue Heron on the 12th when a juvenile bird was spotted walking on the gull island! On the same day the observatory's 3rd ever Western Sandpiper, a juvenile, touched down briefly.

The banding was really quite slow during the period as we only banded 381 birds. It picked up a little towards the end with 84 birds banded on the 18th and 66 on the 19th. The top five for mid-August was  Alder Flycatcher 194, Yellow-rumped Warbler 36, Blackpoll Warbler 33, Yellow Warbler 24, and Orange-crowned Warbler 20. Three new species for the season were caught: Western Wood-Pewee, the observatory's 4th ever banded Townsend's Solitaire on the 19th and a Song Sparrow on the 18th - only the 2nd record for the observatory! The current season top five is as follows: Alder Flycatcher 282, Yellow-rumped Warbler 140, Yellow Warbler 98, Blackpoll Warbler 70, and Wilson's Warbler 46.

The banding totals as of August 20th (the number in brackets indicates the number banded since the last blog entry):

The first ten days of August offered some warm temperatures and sunshine combined with pretty mediocre banding. However, we had highlights too biggest one of which was a juvenile Northern Rough-winged Swallow on the 4th that flew a couple of loops around the creek mouth offering great binocular views! Unfortunately no photos were obtained of this exciting first record for TLBO.

Other sightings of interest included a juvenile American Golden-Plover and two early Say's Phoebes on the 3rd, the first good count (55) of Red-necked Grebes on the 4th, three Red-breasted Nuthatches on the 5th, and Red-necked Phalaropes on the 6th (1) and the 7th (3). 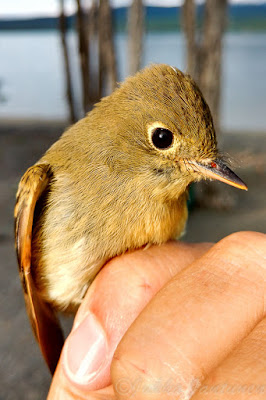 Otherwise banding was steady but rather slow. The total for the period was 323 birds, the top five being Alder Flycatcher 76, Yellow Warbler 42, Yellow-rumped Warbler 41, and Blackpoll and Wilson's Warbler both 24. The current season top six is Yellow-rumped Warbler 104, Alder Flycatcher 88, Yellow Warbler 74, White-winged Crossbill 38, and again both Blackpoll and Wilson's Warbler 37.

The banding totals as of Aug 10 (the number in brackets indicates the number banded since the last blog entry):


The Teslin Lake Bird Observatory opened for the fall season on the 25th of July. The site was unusually dry as the lake water level is lower than on any other year at the time of the season opening. That, of course, is due to the very low snow pack this past winter. 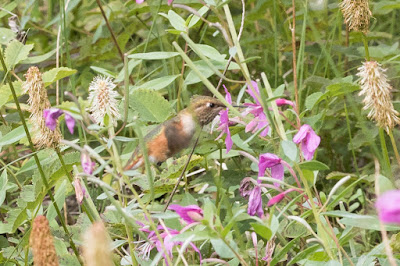 As one can expect, most of the birds seen at the observatory are local or nearby nesters and their off-spring. Common species include Yellow,  Yellow-rumped and Blackpoll Warbler, Black-capped Chickadee, Warbling Vireo, and this year White-winged Crossbill which have had a great summer in the Yukon and are everywhere! The early part of the season is usually slow with migration and exciting observations but we did have one exception - the observatory's second ever Rufous Hummingbird was first seen on the 27th and then caught on the 29th! Other notable sightings include 33 Bohemian Waxwings on Jul 26 (high count this early), 58 Arctic Terns and a Red-winged Blackbird on Jul 28 and a migrating flock of 37 adult Mew Gulls on Jul 30.

The banding season has started very well and our season total in the end of July was 252 birds - the second highest for the date in the observatory's history! The banding top five is as follows: Yellow-rumped Warbler 63, Yellow Warbler 32, White-winged Crossbill 16, Blackpoll Warbler 13 and Wilson's Warbler 13. We've also caught unusually high number of Hammond's Flycatchers and Orange-crowned Warblers for the time of the year. Some of our banding highlights include a Spotted Sandpiper and a  very early Golden-crowned Kinglet on Jul 25, an adult Yellow-bellied Flycatcher and a Red-breasted Nuthatch, White-crowned Sparrow and Pine Siskin, all early captures for the site even if they nest nearby, on Jul 27, and three Northern Flickers on Jul 31.

The banding totals as of July 31: